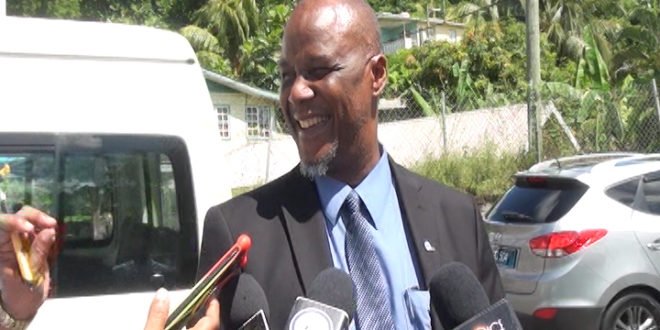 [Press Release]  It is often said that actions speak louder than words.

That is the premise which guides the “Safe Streets Project”, which will be rolled out in the capital city of Castries, this coming weekend.

After many years of promises, mishaps, liability payouts and threats of legal action, concrete action is now being taken to make the streets and sidewalks in Castries a lot safer.

The Castries Constituency Council is spearheading the “Safer Streets Project” which will see the permanent removal of many metal stalls, pallets and other unsightly and potentially hazardous items along city sidewalks and roads in Castries.

“We are paying a lot of claims -the last one we had, the person actually broke their jaw,” Mayor Francis disclosed, adding that the situation cannot continue.

The aim is to reduce the risks of harm, injury and danger for pedestrians maneuvering the city streets and sidewalks, while at the same time facilitating enterprise.

Castries Mayor His Worship Peterson D Francis says “after years of turning a blind eye”, the time has come to arrest the situation.

This weekend, Mayor Francis will lead a team to embark on the first phase of the “Safer Streets Project” concentrating on all streets and alley ways in the city.

The CCC will also be monitoring to ensure that items removed are not returned to city streets and sidewalks.

Consultations with key interests will be a continuous exercise, to ensure stakeholders buy into and support the project.

The Safer Streets Project is part of a broader national agenda to make Castries one of the cleanest and safest cities in the Caribbean.