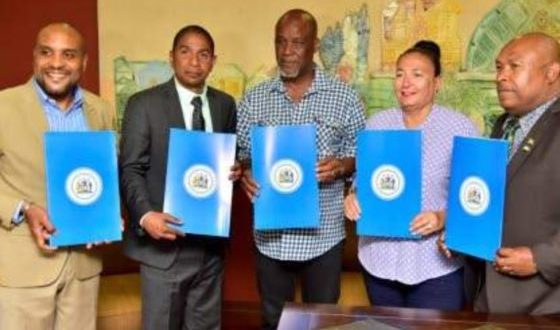 [Press Release] Castries Mayor, Peterson Francis, has declared that he is ’empowered to serve better’ after attending a three-day inaugural Caribbean Conference of Mayors in Jamaica, according to local media reports.

The event was held from April 9 to 12 under the theme ‘Caribbean Cities: Honouring the Past, Embracing a Smart Future’, with special focus on industrial opportunities, building linkages among regional mayors, improving cities, and promoting solidarity.

Mayor of Kingston Senator Delroy Williams disclosed that the event provided an opportunity for those in attendance to share developmental approaches in their respective countries.

Williams was addressing a press conference held at Norman Manley International Airport in Kingston Thursday, where the mayors signed the ‘Kingston Accord’.

The Kingston Accord is a pledge from the mayors that they can work together, as they face the same challenges throughout the Caribbean.

Mayor Williams explained that the sessions provided ideas that are crucial to building the various municipalities across the region.