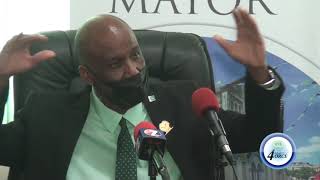 It appears that former prime minister dr. Kenny Anthony’s contribution to the debate on the 2021/2022 estimates has touched a nerve of one of the Francis siblings. Mayor of Castries Peterson Francois has leapt to the defence of his brother – national security minister Hermangild Francis. The Vieux Fort south hopeful’s record as a government minister was pillared by the incumbent MP during the recent budget debate. Now the mayor has taken umbrage, and has launched a broadside of his own.