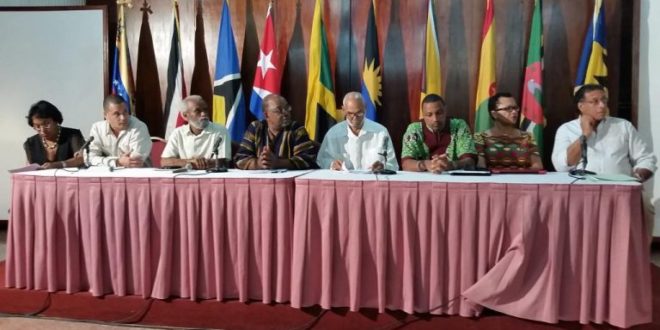 PRESS RELEASE – A new solidarity organization has been launched in Saint Lucia.

It’s the Saint Lucia Chapter of the Caribbean Network in Defense of Humanity (CNIDH-Saint Lucia),  launched here on Friday, May 19th 2017.

The local chapter was established in April and a soft launch took place Friday, at which the founding members agreed to build the local chapter drawn from the cultural and intellectual community in Saint Lucia and throughout the Diaspora.

The CNIDH already has branches in Barbados and Cuba, and like the others, the local chapter will coordinate solidarity activities and statements by related cultural and intellectual activists, including writers and artistes who subscribe to its aims and objectives.

CNIDH-Saint Lucia will work with individuals and entities to offer solidarity to causes and defend principles of humanity in the interest of the Caribbean and the wider world.

It will also work with existing national solidarity organizations (Haiti, Cuba, Venezuela, etc) and encourage wider solidarity reaches to other needy national, regional and international causes related to defense of humanity across the Caribbean and South America.

CNIDH-Saint Lucia was recently represented in Venezuela by one of its founding members, journalist Earl Bousquet, who is also President of the Saint Lucia-China Friendship Association (SLCFA) and Chairman of the Saint Lucia National Reparations Committee (NRC).

The occasion was a special solidarity session attended by representatives from 35 countries, including five CARICOM member-states, related to the Constituent Assembly the Venezuelan government is pursuing as a peaceful solution to the country’s current problems. (See related statement attached)

The new Saint Lucia entity plans to publish its aims and objectives to explain the principles that will drive its actions and help in its recruitment drive through public activities, press statements and Social Media.

It will also seek to encourage coordination of activities by like-minded solidarity-based organizations throughout the island, when and where common aims coincide.

CNIDH-Saint Lucia will be formally launched at a later date and time, to be published and advertised.