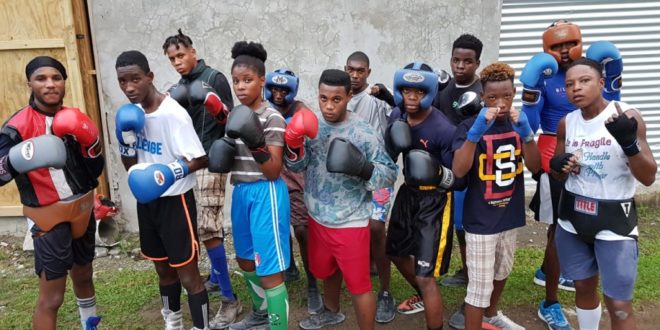 Press release- At least 140 boxers from 14 countries are expected to participate in the 2017 Caribbean Development Boxing Championship which gets underway at the Beausejour Indoor Facility here on Wednesday, December 13th 2017.

According to one of the organisers, Cathy Harper-Hall, there is expected to be a total of 90 bouts by the time the championship is ended. Seven of them are expected to be female bouts with  10 female boxers being entered . They comprise five from Barbados, two from Trinidad and Tobago, and one each from Aruba, Grenada and hosts Saint Lucia.

The standard of Boxing is going to be very good . Apart from the best boxers in the region, we will be having  the top judges and referees and the renowned James Beckles as supervisor.  An amazing 90 bouts over four days and four nights, ” she said.

President of the Saint Lucia boxing Association David Christopher pleaded with the Saint Lucian population to come out and support the tournament as if it was their own due to the fact that the local Association was bearing the full cost of the event. He singled out the Saint Lucia Olympic Committee Incorporated, the Department of Youth Department and sports, and some local business interests for making a substantial intervention after funds from the International Boxing Federation  (AIBA) were not forthcoming.

“We started with a budget of $96,000 dollars , but that will certainly go up by the time the championship is ended, ”  Christopher disclosed.

Past President Joseph ” reds ”  Perreira  says his interest is to get as many Saint Lucians as possible to come out and support the local team and the Championship in general as it was an event of great significance to Saint Lucia and the Caribbean.

“We want  to see all seats filled. The admission is not  really a charge but should be seen as a contribution towards the effort to bring such a huge event to Saint Lucia. This is the third event that the local association has been staging this year and we want persons to come out and support in a much more practical way, ” he said.

The championship days will be held in two segments. There will be initial action in the ring starting at 3:30 pm, followed by a break before the  evening  bouts recommence from 8 pm.  Organisers have promised that transportation has been organised from the Beausejour junction to the indoor facility and are assuring  patrons they will be guaranteed public transportation back to that location after the nights’ cards.

There will also be a formal opening ceremony at 7 pm on the opening night.