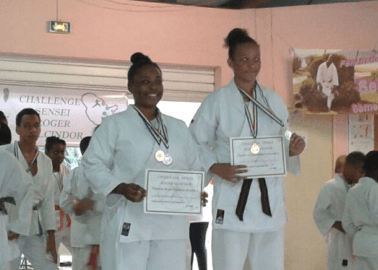 Bushido Shotokan Karate Do Academy back from ‘Sensei Alcindor Challenge’

Nyim Wilkie, a student of Leon Hess Secondary School battled his way to First Place with an impressive performance of the Kata Bassai Dai. But victory was snatched by 0ne (1) point in the qualifying rounds to the Finals for the top spot in the Kumite event.

Shodan Petrona Alexander won an automatic second place in both Kata and Kumite.

But it was her exhibition of GION kata that won her a thunderous applause. However, that was not sufficient to topple  the spirited & electrifying performance of aspiring Shodan Roseline Jacque Unn Toc of Gaet Karate School-Robert’ whose performance in Kata and Kumite, but particularly Kumite, was an excellent Technical display in control, speed, aggression and technique.

Young potential, Kyu Lil Sylvest, a student of Saint Mary’s College, gives a creditable account of himself, both in Kata and Kumite.