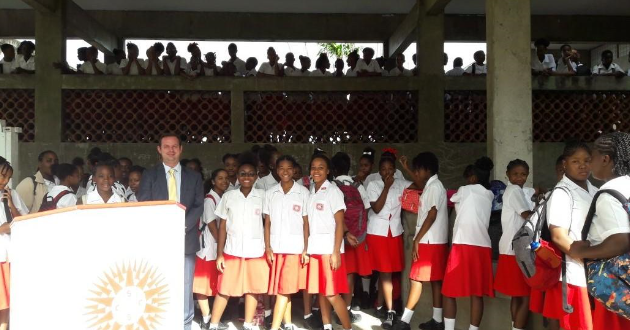 Resident British Commissioner, Steve McCready, told students that with over one billion young people living in the 53 member states of the Commonwealth, the organisation places great value in its youth as a force for positive change throughout the Commonwealth family.

British High Commission staff also held an interactive session with a well informed class of Standard Four Social Studies students. The discussion focused on a range of issues important to young people including Commonwealth countries working together to build economic prosperity, celebrating and making the most of the Commonwealth’s diversity, and how Commonwealth members can work together to tackle the effects of climate change.

The team was delighted to be joined by Miss Independence 2018, Kurnisha Augustus, who spoke to students about the Commonwealth theme for this year, “Towards a Common Future”. Miss Augustus highlighted several young people from St Lucia who are role models for the Commonwealth in study, sport and youth participation.

Mr McCready expressed his gratitude to Principal Marva Daniel, Counsellor York and all the staff and students of the Castries Comprehensive Secondary School for an informative and engaging morning. In the run up to the Commonwealth Heads of Government Meeting being held in London next month the British High Commission will host Commonwealth Big Lunches in Vieux Fort Special Needs School on 19th March and Canaries Primary School on 18th April.