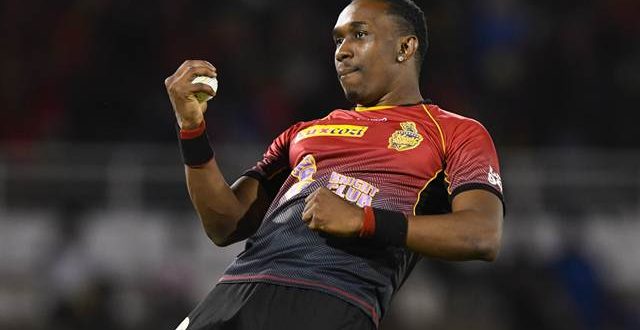 Allrounder Bravo hit 37 in just 11 balls to give Trinbago a fourth successive victory in the competition and ensure he is the only player in the CPL, with 50 or more runs to their name, to have a tournament strike rate in excess of 200.

The T20 veteran’s figure stands at a phenomenal 253.7 in this year’s competition, a statistic which has helped him up to sixth in the overall Player Performance Index – a rating system which assesses a variety of datapoints to produce a definitive list of the world’s best short-form cricketers.

In the CPL Index, Bravo leaps above Shoaib Malik, who drops a place to fourth.

Andre Russell continues to lead both the global Index and its CPL-specific equivalent, with Sunil Narine second in each set of standings.

Colin Munro, the hard-hitting New Zealand batsman, is up to 23rd in the world after smashing 76 off 50 balls for Trinbago but remains eighth in the CPL, despite being the tournament’s top runscorer.

Munro’s countryman, Colin de Grandhomme, did not take long to make it into the CPL top 20. De Grandhomme only played his first games of this year’s edition for Jamaica in the past seven days but he benefits from an existing Player Performance Index position of 37th.

Imran Tahir’s miserly bowling has seen him improve his world standing, moving up to 38th in the overall Index with a CPL economy rate of under six runs per over to go with his 13 wickets.

Sohail Tanvir climbs from 26th to 24th after helping Guyana Amazon Warriors to two wins this week. His unbeaten 37 off 20 with the bat saw them over the line with one ball to spare against St Kitts & Nevis Patriots, and his key dismissals of Martin Guptill and Steve Smith helped to set up a more comfortable victory over Barbados Tridents.

The CPL’s joint top wicket-taker is now up to number 60 in the CPL Index with 14 victims.