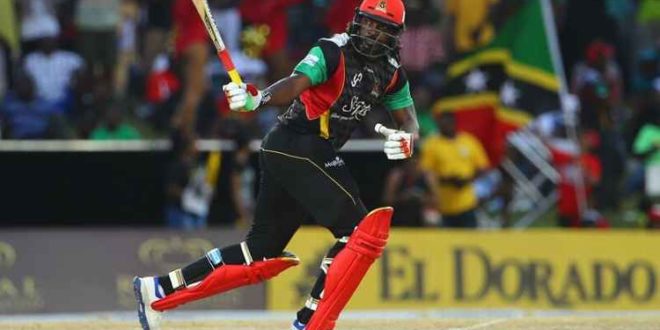 Darren Bravo and Brendon McCullumblitzed eight sixes off the final 13 balls of a rain-reduced chase to leave hosts St Kitts & Nevis Patriots shell-shocked as Trinbago Knight Riders escaped with a dramatic eight-wicket win (Duckworth-Lewis-Stern). The win increased the Knight Riders’ first-place advantage over Patriots to three points and a win in either of their final two matches will clinch them top spot in the league stage.

Knight Riders held slim hopes after Colin Munro fell in the fourth over of the chase to Samuel Badree, after which rain halted their 13-over chase – a consequence of two lengthy delays during the Patriots innings – and reduced it to a six-over sprint in which they needed 52 off the remaining 17 balls. Yet, Knight Riders reached the target with four balls remaining.

Evin Lewis hits a ball to the boundary every 4.06 deliveries so far in CPL 2017, a rate behind only McCullum (3.80) and Mohammad Nabi (2.92) for players facing a minimum of 30 deliveries. Lewis was twice as good on Wednesday night, hitting every other ball he faced for four or six in a rollicking 14-ball 39.

He distributed his punishment evenly against Knight Riders, driving Ronsford Beaton for a straight six in the second over before doing the same to Sunil Narine in the third. In the next two overs, he pulled each bowler over square leg for another set of maximums. Lewis was on track to bring up the fastest fifty of CPL 2017 – currently held by Darren Sammy off 23 balls – before he was given out to Narine caught behind. Replays showed the ball missed the bat entirely on a back-foot swipe, with the sound of the ball clipping the pad flap. That duped the umpire into upholding Narine’s appeal for a catch as Lewis walked off bemused.

Just 5.5 overs into the match, with the score at 60 for 1 and Gayle on 19, a floodlight power-failure halted play and eventually resulted in a 90-minute delay, which shaved off two overs from each innings. Just 2.1 overs after the break – as Patriots advanced to 86 for 1 – a further 45-minute rain stoppage caused another five overs to be peeled off.

With only five overs left in the innings, Patriots went on to nearly double their score. Their 162 in 13 overs ended up as the sixth-highest first-innings total of the tournament, and the highest scoring-rate of any innings in CPL 2017 (12.46 per over).

Chris Gayle was near his menacing best at Warner Park. On three separate occasions – Ashley Nurse in the seventh, Dwayne Bravo in the 10th and Ronsford Beaton in the 13th – he smashed sixes off consecutive balls. He reached his fifty in 34 balls; in the next 12 deliveries, he raced to 93.

Gayle needed two boundaries off the innings’ last three balls to reach a ton and Beaton, the bowler, served up another pie, but the batsman mistimed it to deep midwicket. Gayle’s 93 was the second-highest individual score of CPL 2017 and also moved him to the top of the season’s run charts.

Lewis and Gayle’s knocks, however, were mere afterthoughts in the face of the assault from Darren Bravo and McCullum. Set an adjusted DLS 13-over target of 169, Knight Riders scored only two runs off the bat in a five-run opening over from Ben Hilfenhaus.

McCullum got hot in the second over against Carlos Brathwaite, taking him for a six and two fours, then followed up with a trio of boundaries off Hilfenhaus in the third. But Narine and Munro fell in the space of four balls to the Australian and Badree, before rain stopped the chase with the score 34 for 2 in 3.1 overs.

When the rain finally ceased, the target was reduced to 86 in six overs. The drama was just beginning though, as Bravo pumped his first two balls straight over Badree’s head for six before heaving a short ball over midwicket for a third in three balls to start his innings. From there on, the equation was simple.