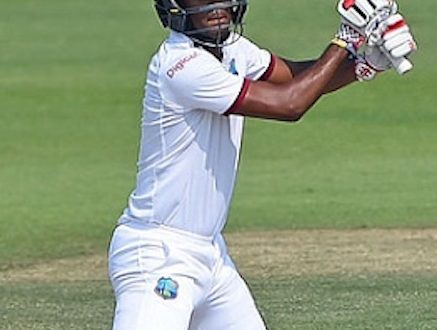 Returning to Headingley where he scored 134 and 95 to help the Windies stun England in the second Test by five wickets three weeks ago, Brathwaite managed just 18 as the hosts reached 62 for one in reply to Warwickshire’s first innings of 219.

West Indies opener Kraigg Brathwaite.
The 24-year-old right-hander fell in the third over before the close after adding 61 for the first wicket with Adam Lyth who was unbeaten on 35.

At Lord’s, outstanding former Test star Shiv Chanderpaul stroked 29 for Lancashire, to close in on 800 runs for the season on the opening day of their clash with Middlesex.

The visitors ended the day on 113 for five in response to the 233 made by Middlesex, after Chanderpaul added 39 for the fifth wicket with captain Steven Croft, who made 33 not out.

Middlesex had earlier required defiant half-centuries from tail-enders Toby Roland-Jones (53) and Ollie Rayner (52) in a 102-run, ninth wicket partnership, to recover from 89 for seven at one stage.

2017-09-20
Previous ENG/WIS-We let ourselves down, laments Holder
Next FLIGHT DISRUPTIONS DUE TO HURRICANE MARIA