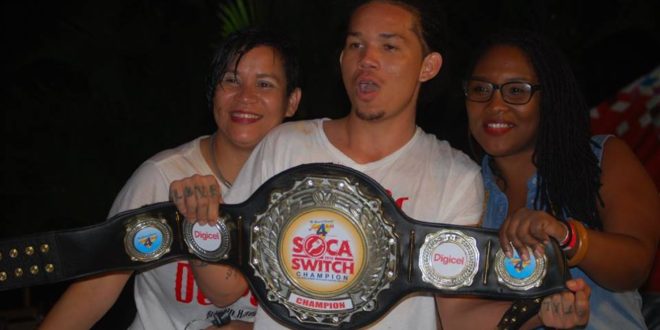 On Saturday May 20th, Just4Fun Carnival Band hosted their third annual soca competition. The contest, dubbed Soca Switch this year took place at the Gaiety gardens in Gros Islet. Organizers say the main goal of the competition is to break a long running trend of late releases among the soca fraternity in St. Lucia. This year the organizers of Soca Switch added a new element to the competition. On the night patrons experienced the first ever Lucian Kuduro competition, which featured some of the popular names in the fast paced, up and coming genre.

13 Contestants participated in the soca arena, which included;

And while only 6 of the 12 contestants showed up to compete, the show went on as judges sort to find the first ever Lucian Kuduro King.

The Kuduro or Dennery Segment contestants for the night included;

At the end of a long night of musical rivalry, Brandon Harding would top the Soca Competition walking away with $10,000 and a Samsung S8 from Digicel. Private Six would end his long musical absence by placing second followed by Mysterio in third.

And in the Lucian Kuduro segment the artists definitely delivered, giving fans an exciting show. In the end popular Dennery Valley artist “Subance”, would top the lineup walking away with $5000 and a Samsung S8 from Digicel.

The event was well attended and is part of a long list of carnival activities put on by Just4Fun Carnival Band for the 2017 Carnival season.