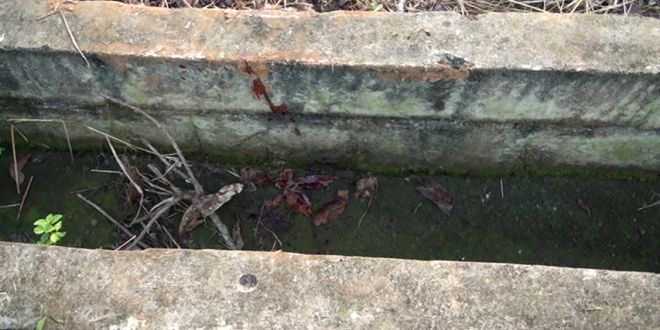 Blood splatter over a drain a short distance from where the robbery suspect was found unresponsive at Sarrot, Bexon

Shortly after 1 am November 17, officers attached to the Criminal Investigations Department in the police force discovered the unresponsive body of an alleged robbery suspect. The find was made in a lightly wooded area at Sarrot, Bexon.

Hours earlier between 7 and 8 pm on November 16, two armed men allegedly held up the local bread van. The driver, an employee of Flava Bakery in Sarrot, relayed his ordeal to his employer Sophia Evans. Evans spoke to HTS news4orce about the deadly incident involving her driver who is now at the centre of the homicide investigation.

The identity of the bread van driver has been withheld. He told his employer that one man flagged him while plying the usual Sarrot / Sand de Fay route. After coming to a stop in near a streetlight, the bread-van driver alleges that two armed masked men accosted him. The masked men cornered the driver and passenger side of the panel van and demanded cash.

According to Evans, the masked man on the driver side of the bread van was armed with a gun and allegedly discharged gunshots to force the driver to comply with the demands. The bread van driver then reportedly discretely reached for a knife kept inside the vehicle and a scuffle ensued.

The gunman was reportedly stabbed in the torso before the two masked men fled.

Police at news time were not able to identify the suspect who was later found lifeless in the bushes. Reportedly, the unresponsive man was still masked and police recovered a gun where he lay.

The homicide toll in light of the botched bread van hold-up has risen to 53-a record in Saint Lucia. Homicide detectives say that the driver is assisting with investigations.

2017-11-17
Previous ARC Flotilla “Sail Off” Sunday
Next Kimani Melius is the latest St. Lucian to make it to a West Indies squad