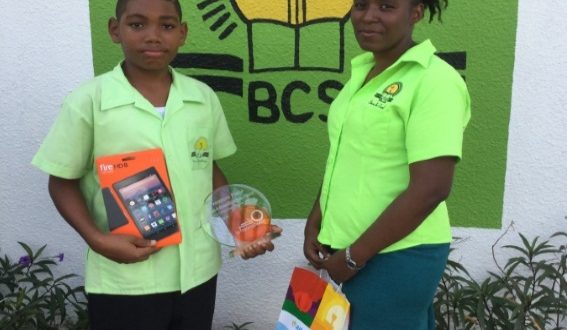 [Press Release] Jessie Frederick, a Grade 5 student from the Bocage Combined School emerged as the winner of this year’s Francophonie Poster Competition.

This is an annual competition open to all Primary Schools on the Island in observance of Francophonie (Celebration of French Language and Culture) around the world. This was organized by The St. Lucia National Commission for UNESCO.

He submitted a poster under the Theme “ La Francophonie: un univers magique” ( Francophonie: A magical Universe). His hand painted submission was able to edge out students from many Primary Schools in St. Lucia.

He walked away with a top prize of a Tablet, $200 Educational supplies voucher, 3 months scholarship to the Alliance Francaise, 1st Prize Trophy and enrollment in a Summer Art Programme.

The principal of the School, Mr. Davis Thomas and the French Teacher, Mrs. Jammick Alcee were very pleased with Jessie’s accomplishment.

They have promised to make Jessie Frederick an honorary ambassador to motivate the other students to show more interest in the French Programme currently done at the School from Kindergarten to Grade 6.