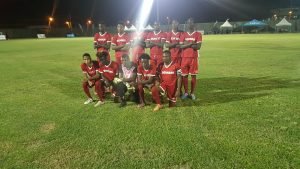 Press Release- The third place play off between Dennery and Central Castries took place on October 6th at the PMG in Vieux Fort infront a good capacity crowd. Dennery got to this point after Laborie came from 2-0 to win it all 3-2 deep into extra time. Central Castries was defeated by the defending champions 2-1 in the last semi final.

Dennery made at least six changes from their last game against Laborie while Castries Central made only two changes in defense. From the start of the whistle, both teams played attacking football as there was nothing to lose but all to play for. Central Castries created a number of clear opportunities but for some reason just could not get the ball at the back of the net. First half ended 0-0.

Second half was more of the same. Dennery started getting into the game hence created at least five chances to bury this game but followed the same fate as Central Castries. On a night where no one wanted this game to go to penalties it seems inevitable. Patrons were eager to see the finals hence were frustrated with both teams not capitalizing on their chances. Approaching the final 10 minutes of play both teams kept pressing as no one wanted to play an extra 30 minutes of football into extra time. In the dying minutes Shaquille Degazon, Central Castries player, got a clear opportunity to settle this game but missed an entire goal. This allowed the game to into extra time.

After 90 minutes of running one would expect most players to be fatigue and dehydrated and this clearly showed on the night. Both teams dug deep to find the extra strength to see this game through. By then a crowd which started at 200 was now at the 2000 mark though majority of these fans belonged to Laborie and Vieux Fort South. First half of extra time went by with more of the same, strikers not scoring what I would call clear opportunities. Second half of extra time went by with more of the same but in the 117th it all changed. Shem Ermay was fouled by a Dennery midfielder just on top of the 18 yard box. Jason Similien, a GMC United Club member and Central Castries most decorated player, stepped up for this free kick. Wall was well set up by the Dennery goal keeper hence everyone expected this ball to sail in the wind for a goal kick but Jason had other ideas. With a kick straight out of the training ground Jason sailed that ball over the wall but what was so terrific was that the ball was moving  leftward of the goal but swung right giving the keeper absolutely no chance to react. Jason Similien as he did against Roseau Valley was yet again the savoir for Central Castries. Game ended 1-0 in favour of the City boys.