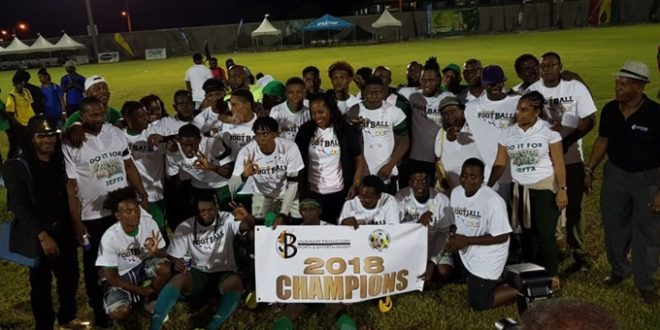 Press Release- The curtains of the 2018 16th edition of the Blackheart/SLFA knockout competition came to an end at the PMG on October 6th infront 8000 spectators. Both teams in the grand final were aiming to create their own piece of history. Laborie playing their first ever district finals and Vieux Fort South aiming for a 3peat. The Finals started with a tribute to a fallen star, JEFFA BELLAS. Jeffa was a lover of the sport of football and was integral in the success of Vieux Fort South over the years. She also served on the national scene with the SLFA, managing their national youth female teams. Jeffa managed the Vieux Fort South senior team to two Blackheart back to back titles. She will never be forgotten by the football community.

Laborie got to a dream final after first defeating the best from the West, Canaries a former Blackheart Champion, then defeated the best from the North, SLFA COCA COLA ISLAND CUP Champions Marchand, where they finally defeated the best from the East, Dennery from a come back win. This history will be forever etched in Blackheart history books hence Vieux Fort South could not take Laborie for granted. Laborie has been the dark horse as did Croatia in the World Cup Finals of 2018. Back to back Champions, Vieux Fort South had all to play for in this year’s competition. They wanted to be the first team to win three Blackheart titles consecutively but surely they had to fight to get there. They first had to dispatch a valiant La Clery then a hyped DX and finally a brutal Castries Central to get to yet another final.

The final started with both teams pressing and defending well. Vieux Fort South made some tactical changes with a key one being Jamil Joseph back in defense instead of lone striker. This did not pay much dividends for the defending champions as Jamil had a hard time dealing with the pace of the Laborie right attacking players. Vieux Fort South created a number of opportunities but goal keeper Vence Agdormar of Laborie was a great wall in goal hence kept Laborie’s hope alive. On the counter Laborie’s prolific striker went through Vieux Fort South’s defense to put one at the back of the net. The crowd erupted but fail to realize the goal had been disallowed from an offside ruling. The defensive flaws of Vieux Fort South was being explored. The deadlock was finally broken in the 32nd minute of play with a goal from prolific striker Darrel Francis  to put Laborie 1-0 in a game most had ruled them out of. Laborie maintained their defensive shape to ensure they went into the dressing room with the advantage. First half ended 1-0 in favour of Laborie.

Second half started differently for both teams. Experience coach vs novice coach. Laborie decided to change their tactic of attacking a wounded Vieux Fort South and went into defensive play with seven players behind the ball at all times. That was their biggest mistake!!! Vieux Fort South made a few tactical changes once more,  this time Jamil Joseph taken from right back to centre forward.  Laborie’s play maker Dornan Edward had to be substituted in the 57th minute of play due an injury created by Sarn Savry. That’s where it all changed for Laborie. Vieux Fort South high pressing with their wing attacks created space behind Laborie’s defense. Also with Laborie’s midfield weakened Gregson President had time and space to dictate the pace of the game. Vieux Fort South got a corner in the 59th minute of play. A sweet corner kick landed on Jamil Joseph’s head to easily beat Vence who had been so good up to this point. Game being equalized at 1-1 Laborie had to change tactics but lacked the quality in midfield to effect any change in the game. Vieux Fort South then took the lead in the 69th minute of play with an OWN goal by Vence Agdormar after a poor clearance by Joven Stephen saw the ball coming back goal side. Vence made the initial save but dropped the ball in his own goal. Laborie had no choice now but to attack hence played a high line. This high was finally exploited in the 80th minute of play by centre back Barnard Edward when he scored from over 50 yards away with a long range kick over the keeper’s head. This allowed Vieux Fort South to go up 3-1. Game was over for Laborie. Vieux Fort South added more salt to the wounds of Laborie in the 90th minute of play with a solo goal from Antonius Meyers.

Trophies and medals were dished out at the end. The grand prize ceremony will be done at a later date.