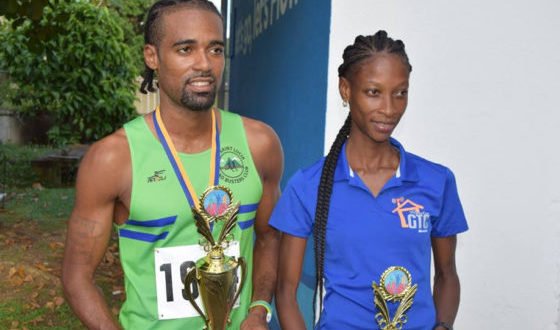 In the men’s division, the run was dominated by Road Busters. National athletes Michael ‘Mega Boost’ Biscette and Michael James set a strong pace on the flat, fast course, until Biscette began pulling away on the slight uphill of the Marisule Highway, eventually winning in 19:26.34, just 10 seconds ahead of James, 49 seconds ahead of Vinus Stanislaus, the top under-20 competitor, and Dominica’s Jonathan Celestin.

Among the women, however, it was Grenada’s Kenisha Pascal who took home the top prizes in the early morning run. Her run of 18:35.72 earned her sixth place overall in the field of 60. Second across the line for the ladies was Chantal Glasgow of Road Busters, whilst 15-year-old Keva Pierre, hailing from the Nature Isle, the Commonwealth of Dominica, took third place and first in the junior division.

The top male and female runners were rewarded with gold medals, a trophy, and a cash prize of $500.00 each. There were trophies as well for the oldest male and female entrants, Charles Sayers of Corinth, and Leona Roberts of Dominica. Also awarded trophies were the youngest registrants, Kadian Pierre (Morne Stars) and Quest Gaston (Road Busters). Everyone taking part was given a bag and water bottle.

Overseas runners, elite local athletes and walkers alike expressed their delight at this event, which the club hopes to make an annual affair. For its part, the executive of Morne Stars thanked their sponsors, all of those who came out to participate, and the officials who gave generously of their time, not to mention the Dominica Athletics Association and Road Busters, especially their president, John Gaston.