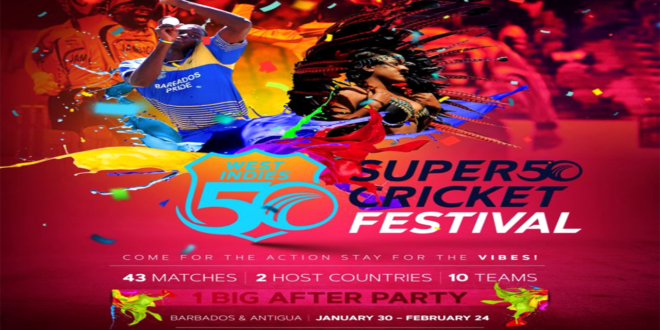 (PRESS RELEASE) – With just a week to go before the start of the Super50 Cup, the regional franchises have announced their squads featuring WINDIES international and future stars.

In addition to seeing if the Barbados Pride can retain their title as 50 over white-ball champions, this year’s Super50 Cup is vital to preparing WINDIES players for the ICC World Cup 2019 Qualifiers in Zimbabwe in March. It’s also a great opportunity for players to push their claims for selection for the International Home Series against Bangladesh in June/July.

“The Super50 Cup is a great competition and we are delighted that Kent and UWI’s Combined Campuses & Colleges are coming back, as well as welcoming Hampshire and the USA to join our Territorial Board Franchises. This year’s tournament will also provide the ideal match preparation for our WINDIES Men’s Team ahead of the vital ICC World Cup qualifiers in Zimbabwe.” says Cricket West Indies’ CEO, Johnny Grave.

The Super50 will parade top performers featuring established International stars with a great mix of youthful talent from across the region in four (4) weeks of intense, explosive and colourful cricket across 43 matches in Barbados and Antigua.

Fans can snap up early bird tickets available to save money on match or even purchase a 23-match season pass in Antigua for just EC$160. These early bird prices are available up until 29th January, prior to the first games in Barbados and Antigua scheduled on the 30th and 31st January respectively.

Ticket prices start from as low as US$5 per match in both countries.

For Zone A matches in Barbados, tickets are available at the office of the Barbados Cricket Association (BCA) and at Kensington Oval. Tickets start at $10 Barbadian.

For Zone B matches in Antigua, tickets are available at the box-office and online with the TickeTing App prior to January 31.

Patrons can save EC$10 per ticket if they capture the early-bird specials giving them access to 2 matches per day. The most avid cricket fans can see all 23 games in Antigua for just EC$160, an early bird saving of EC$100 on the full slate of matches

There will be increased coverage of this years’ event with ESPN and the Cricket West Indies Match Centre. ESPN’s coverage includes nine live games from the Coolidge Cricket Ground in Antigua. The first live match will feature 2017 runners up, Jamaica Scorpions vs Guyana Jaguars on Feb 8th. The nine live matches will also be shown via authenticated digital streaming on ESPN3 in the US (available in the WatchESPN app) and ESPN Player in the Caribbean.

The ESPN coverage will also feature highlights from the matches in Barbados. All the other matches will be streamed via the CWI match centre (www.windiescricket.com) and the CWI Facebook page.