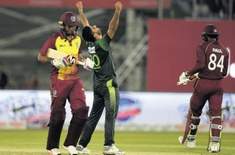 Back to Back defeats for WI against Pakistan in T2OI series

A significant difference in quality between teams isn’t like jetlag; it doesn’t wear off in 24 hours. Pakistan turned in another dominant performance in the second game, as they had in the opener on Sunday, thumping West Indies by 82 runs to take an unassailable lead in the three-match series. An unbeaten 58-ball 97 by Babar Azam powered Pakistan to their highest ever T20I score, two more than yesterday’s 203. Hussain Talat, Man of the Match on Sunday, more than played his part in a 119-run partnership with Babar, smashing 63 off 41 balls.