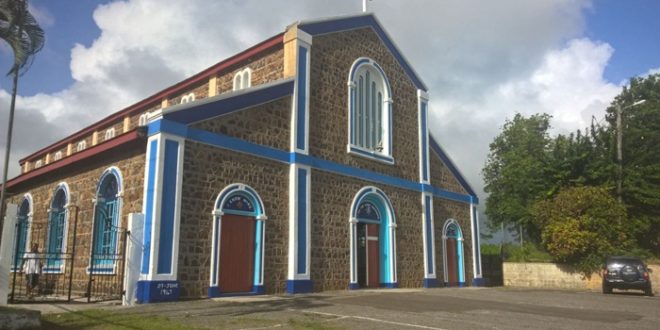 This year the Babonneau community will be remembered for something great and inspiring, while creating a legacy for generations to come.

Seventy (70) years ago, on 29th June 1947, the cornerstone of the Babonneau Good Shepherd Catholic Church was laid. This year the parish honours and celebrate their inheritance; the work of their foreparents who gifted them with this magnificent church.

The Good Shepherd Church is an icon and undoubtedly is the community’s most prominent landmark.

The church was conceptualized by the late Fr. Charles Gachet who was in charge of the district at that time. In 1940 mass was held occasionally in the Babonneau Infant/Primary School but this was regularized to one Sunday a month from 1946.

Parishioners later signed a petition asking for a Chapel to be constructed. The petition was accepted. However, after requesting a count of people attending mass one Sunday, which amounted to one thousand (1,000), Fr. Gachet immediately changed his mind and the building of a large church was decided upon.

Work began in earnest with the leveling of the current site which was at the time a sort of garbage dump. With no bulldozers to do the job, all work was done by voluntary labour. After Sunday mass, Fr. Gachet would outline the work to be done and request a “koudmen.”

Monday was the day of voluntary labour and on certain Mondays there were as many as 150 men and women at the koudmen where work was done to the sound of drums and chak-chak. The ladies would cook, dance and sing to motivate the men to keep on working. There were also paid tradesmen employed for the non-koudmen days who worked for the church at a fraction of the true cost.

Fr. Gachet encouraged parishioners to bring a stone along when coming to mass on Sundays and the Head Teacher, Mr. Peter Joseph, motivated his pupils to do the same every school day.

Most of the stones used in constructing the church were gathered through koudmen. The stones would be collected and placed near the roadside and the owner of Marquis Estate, Mr. Purchase would send the estate truck to carry them to the church site.

The foundation of the church began in March 1947. The church walls were two feet high when Archbishop Finbar Ryan came from Trinidad to bless and have the cornerstone laid on 29th June 1947.

The church was dedicated to the Good Shepherd to meet the wish of the late C.H. Boucher who had given eight hundred pounds for the building. Work continued slowly as funds came in and by 1948 the outer walls were completed. After Easter that same year the pillars were cast in strong concrete with reinforcement.

The Government of Saint Lucia had donated the trees which were converted into local lumber and every Monday Fr. Gachet was with the men on the slopes of La Sorciere preparing the necessary rafters, purlins, boards and the like for use on the church building. By Easter 1949 the roof was completed and the plastering of the walls were nearly finished. The flooring was completed shortly before Easter 1950.

The inside dimensions of the church are as follows: 120′ long, 60′ wide, 40′ high. Its façade was impressive, the design of the timber roof is picturesque, the interior depicts a Basilica style.

On 30th April 1950, the church was solemnly blessed by Archbishop Finbar Ryan. O.P.

Parishioners of the Good Shepherd Church owe a debt of gratitude to the late Bishop Charles Gachet FMI who initiated the project seventy (70) years ago and the many volunteers who selflessly gave of their time and talents. Without their vigorous determination and tireless work the church building would not exist today.

Parishioners are forever indebted to the many parents and grandparents who contributed so generously in cash and kind towards the erection of this church. They pledge to continue walking in their footsteps in order to preserve this priceless inheritance which has been handed down.

The church building, like a new bride has put on a new garment with a magnificent, artistic paint transformation and the creation of a one of a kind three dimensional stained glass mural to the front altars of the church and a mural depicting the sweat and labour of those who constructed it on the inner back wall.

This facelift was accomplished through the initiative of 70th Anniversary Planning Committee, Mr. Giovanni St. Omer (the Artist and Creative Director who is the son of the late Sir Dunstan St. Omer) and the many parishioners, sponsors, and donors who gave of their time, talent and treasurer to help preserve and improve this monument.

The enhancement also involved the repairs to the windows, roof, walls, choir stand, benches and sound system. Most of the beautification and enhancement work took place from February to June, 2017 through many fund raising efforts organized the 70thAnniversary Planning Committee under the leadership of Parish Priest, Fr. Celestine Nwakwuo O.P. and Fr. Henry Nmor O.P.

A grand thanks giving celebration is planned for Sunday July 2nd, from 3pm at the Good Shepherd Church in Babonneau.