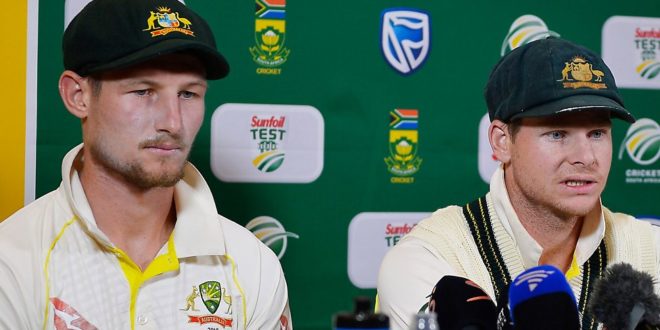 Australia captain Steve Smith banned for one Test and fined

BBC- Australia captain Steve Smith has been banned for one match and fined his entire match fee by cricket’s world governing body for his part in a ball-tampering incident in South Africa.

Smith said the team’s “leadership group” had a plan, carried out by Cameron Bancroft, to tamper with the ball to “get an advantage”.

Smith, 28, will now miss the fourth and final Test of the series.

Bancroft, 25, was fined 75% of his match fee and got three demerit points.

Smith admitted a charge of conduct “of a serious nature that is contrary to the spirit of the game”, said a statement from the International Cricket Council (ICC).

“As captain, Steve Smith must take full responsibility for the actions of his players and it is appropriate that he be suspended,” said ICC chief executive David Richardson.

Hours later, the Australians lost 10 wickets in the final session of day four to lose the third Test by 322 runs.

Chasing a target of 430, they reached 47-0 at tea but were all out for 107. Smith had made one when he top-edged Kagiso Rabada for six, but soon departed for seven.

South Africa fast bowler Morne Morkel, who will retire from international cricket at the end of the series, took the final wicket to finish with 5-23 as the hosts took a 2-1 series lead.

The final match of the ill-tempered series begins in Johannesburg on Friday.