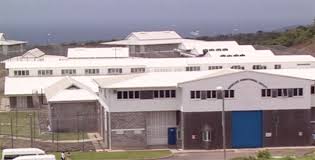 On August 31, 2017 inmate Mervin Moise was found in his residential cell with a noose around his neck. Officers assigned to the maximum security unit where Moise is housed observed Moise behaved differently during their security patrols.

Moise was asked whether everything was okay with him, to which he responded “yes”. However, officers continued to monitor him in his cell. About 7:40 a.m., officers heard the shutting sound of the window flap in the cell housing Mervin Moise. In less than half a minute, officers rushed to his cell and found Moise in a standing position with a noose (made from a bed sheet) around his neck.

He was conveyed to the Facility’s Medical Unit for initial care and subsequently referred to the Dennery Hospital for additional medical attention. Mervin Moise has been incarcerated from December 15, 1998. He is serving a lifetime sentence for the offense of murder at the Bordelais Correctional Facility.

Prior to his incarceration Moise lived in Bocage. He celebrated his 45th birthday earlier this month. Moise was previously on suicide watch in September 2016. He is currently under medical care.