Home / Sports / Atlantic Rally for Cruisers Off to a Smooth Start! 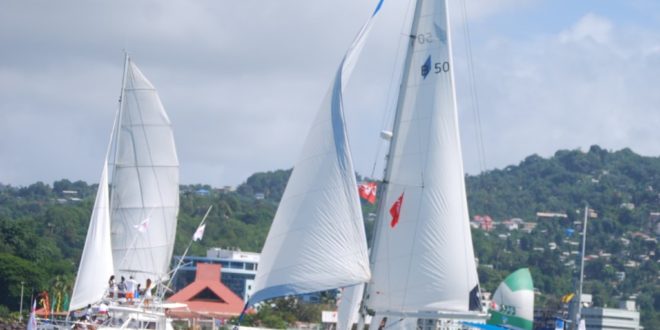 Atlantic Rally for Cruisers Off to a Smooth Start!

Approximately 1500 sailors from across the world gathered on Saturday afternoon for their final instructions and check of the weather, as the Events Company St. Lucia in collaboration with the World Cruising Club got set to put on their annual sports tourism event. The 2017 Atlantic Rally for Cruisers got on the way at 12:30 pm on Sunday November 19th 2017.

Close to 200 boats left the island of Grand Canaria on route to Rodney Bay Saint Lucia. CEO of Events Company Saint Lucia Thomas Leonce, was on the Navy Vessel which served as the viewing point for onlookers. In an interview, Mr. Leonce indicated that after seeing all the effort placed in hosting the finishers in St. Lucia, he was happy to see the commencement of the event for the first time. After two weeks of traveling across the Atlantic, these individuals will be spending time in hotels, renting cars, using taxi services, and re-provisioning for onward destinations, so the total amount of money spent makes it quit an event for St. Lucia, “ Leonce explained.

The event is into its 32nd year running. After setting sail to Barbados for the first few years, the World Cruising Club opted to use Saint Lucia as the end point for the last 28 years. When asked about the prospect of hosting the event for years to come Mr. Leonce added: “as long as the event is being hosted by the World Cruising Club, I am hoping that St. Lucia continues to be the final destination for as many years to come.”

So far, all the Boats have been accounted for, and all are said to be sailing smoothly on route to St. Lucia.