Home / Sports / ARE BARCELONA HEADING FOR SUMMER OF UPHEAVAL AFTER CUP DISAPPOINTMENTS? 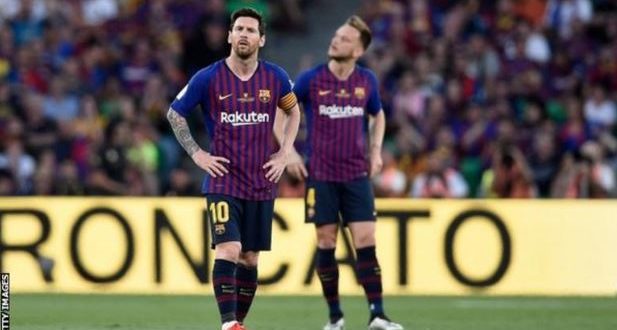 ARE BARCELONA HEADING FOR SUMMER OF UPHEAVAL AFTER CUP DISAPPOINTMENTS?

BBC- Barcelona concluded the season by suffering a second humbling defeat in the space of a couple of weeks, following up their Champions League capitulation at Liverpool by losing the Copa del Rey final 2-1 against Valencia on Saturday night.

Even though they were comfortable winners of La Liga, finishing 11 points clear of second-placed Atletico Madrid and a record 19 points in front of arch-rivals Real Madrid, the two cup losses have hit hard and left manager Ernesto Valverde fighting to save his job.

Valverde has never been popular among the more idealist factions of Barca supporters, who believe he is too conservative and cautious to live up to the club’s high-minded expectations of flowing attacking play.

And he did himself no favours with his team selection on Saturday, reacting to the absence of injured forwards Luis Suarez and Ousmane Dembele by selecting Sergi Roberto – usually a full-back – on the right-hand side of attack.

Barca’s lack of attacking punch and slow midfield allowed Valencia to pick them off at will on the counter-attack, and the half-time changes made by Valverde, introducing Malcom on the wing and Arturo Vidal as an attacking midfielder, were a case of too little, too late.

The team’s problems are by no means limited to the identity of the coach, with many members of an ageing starting XI looking past their best, and the ponderous performances against Liverpool and Valencia bore the look of a team in need of a serious shake-up from top to bottom.

Before Saturday’s cup final defeat, the club had been making strenuous efforts to display a show of unity, to the extent of media-shy skipper Lionel Messi granting his first press conference in more than four years to express his solidarity with Valverde.

But those rather forced attempts to portray a happy camp were smashed to pieces by the loss to Valencia, and a summer of upheaval could lie around the corner – even if Valverde avoids the axe.