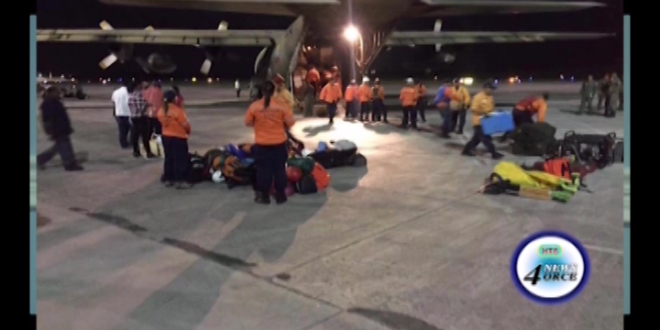 THE CHAIRMAN OF THE CARICOM COMMITTEE OF AMBASSADORS THANKED SAINT LUCIA FOR ITS HURRICANE RELIEF EFFORTS. – GIS

Commissioner of Grenada to the OECS, who is also the chairman of the CARICOM Committee of Ambassadors, His Excellency Ambassador Patrick Antoine, has expressed kudos to the Government and people of Saint Lucia for their assistance to the Commonwealth of Dominica.

Ambassador Antoine spoke at a press briefing on Tuesday, at the OECS Secretariat headquartered in Saint Lucia, following an evaluation assessment after the passage of Hurricane Maria in Dominica.

“It is very important for us to recognize, given that the people of Saint Lucia are so close to Dominica and the Prime Minister is the chairman, it is very important for that support to be sustained in so far as is possible. Again for the public in Saint Lucia, your support and your prayers, your love and compassion, as I talk to people in the hotels and in the cargo terminal at Hewanorra who stayed back last night for instance, as the Venezuelan pilots came in, these are not things you must take for granted, because by dint of what has happened this hurricane season, it is clear that never more apt than now is the saying ‘today for you, tomorrow for you.’

And for that the OECS Commission and I as Chairman of the CARICOM Committee of Ambassadors want to thank the people of Saint Lucia.”

“I don’t want to pretend it’s easy, it’s not. Are people still depressed. Sometimes in the Caribbean counseling is not something we embrace, but people will need counseling. It is deeply damaging. There are children, for instance, I was in the south of the island and it rained two nights ago, and a number started panicking just from the rain. The children need counseling. They are traumatized; the adults too. I saw grown men and women cry. By the time we were leaving people had started building back their roofs. A number of people can’t imagine what life will be like in a couple of years, but they are putting one foot in front the other, and I think we need to help them.”