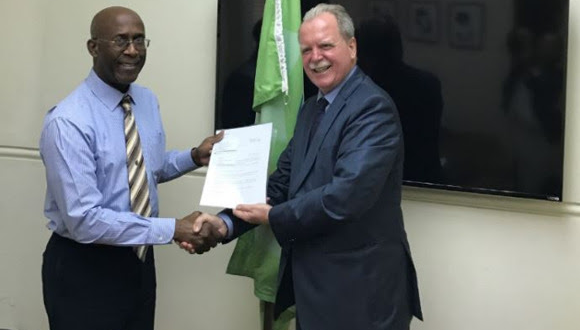 H.E. Holger Wilfried Michael, Ambassador of the Federal Republic of Germany today presented Letters accrediting him as his country’s representative to the Organisation of Eastern Caribbean States (OECS).

The Letters were delivered at a meeting held at the Organisation’s Headquarters in Castries, and accepted by H.E. Anthony Severin, Head of International Relations on behalf of the Director General who was away on official duty. Ambassador Michael was accompanied by Ms. Karolin Troubetzkoy, Honorary Consul of the Federal Republic of Germany.

In accepting the credentials, Ambassador Severin pointed to the long established friendly relations between the OECS and Germany, and assured Ambassador Michael of the Organisation’s commitment to the strengthening of those relations as a basis for the advancement of mutual interests.

In response, Ambassador Michael expressed great pleasure with his new assignment and committed to working closely with the Commission, particularly in areas of priority concern to the Organisation and its Member States.

During the meeting, views were exchanged on a broad range of development cooperation issues and in that regard, Ambassador Michael reiterated Germany’s keen interest in furthering and strengthening cooperation, particularly in areas impacting the sustainable development of SIDS. In this regard, he encouraged the development of project ideas for consideration by Germany.

In closing the meeting, Ambassador Severin congratulated the German Ambassador on his appointment, and assured him of the full support and cooperation of the OECS Commission in the discharge of his new responsibilities.

Both sides agreed to maintain active liaison and to continue discussions in the immediate future in order to pursue the common objective of deepening cooperation.