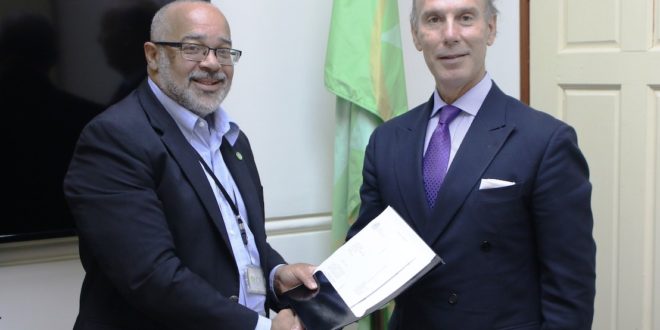 Tuesday, June 27, 2017 — The Ambassador of the Kingdom of Spain to the Organisation of Eastern Caribbean States (OECS) H.E. Javier Carbajosa, presented his credentials to the Director General of the OECS, Dr. Didacus Jules on Tuesday, June 27th 2017, at the Headquarters of the OECS Commission at Morne Fortune, Castries.

In his opening remarks, the Director General welcomed Ambassador Carbajosa to the OECS Commission and congratulated him on the commencement of his term.  He noted the longstanding cordial relationship between the OECS and the Kingdom of Spain and expressed a desire for the strengthening and deepening of that relationship during the Ambassador’s tenure.

In thanking the Director General for the warm welcome received, the Ambassador stated that there is a clear awareness in Spain and even within the European Union (EU) of the different processes and levels of integration in the Caribbean region. He noted that Spain, as well as other members of the EU view the OECS model of integration as an inspiring one.

Ambassador Carbajosa commended the OECS Commission on the remarkable level of cooperation and success achieved by the Organisation in various sectors and indicated that Spain looks forward to working closely with the OECS.

The Ambassador informed the meeting that Spain’s Secretary of State for Latin America and the Caribbean will be visiting the region later this year and has a keen interest in meeting with the OECS for discussions on matters of common interest.  Ambassador Carbajosa confirmed that in that regard, a Memorandum of Understanding which will guide the cooperation relationship between the OECS and Spain will be signed by the Secretary of State upon his visit.

Following further discussions on matters related to bilateral relations and development cooperation, both sides expressed a deep commitment for the further strengthening of relations between the OECS and the Kingdom of Spain.