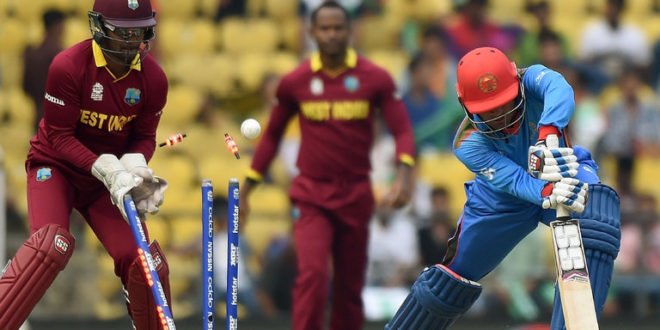 The West Indies were restricted to only 197-8 after winning the toss and batting first, with offspinner Mujeeb Ur Rahman the standout bowler, taking 3-33, including the key wicket of Chris Gayle (1).

Rahmat Shah (68) top-scored for Afghanistan in their run-chase, but was the fifth wicket to fall with 46 runs still needed for victory – Rashid Khan (13no) and Sharafuddin Ashraf (7no) ultimately saw the team to a memorable victory with 2.2 overs to spare.

Making Afghanistan’s win all the more impressive is the contrasting form of both teams so far in the tournament; the West Indies breezed through the group stage with four wins from four, while Afghanistan suffered shock defeats to Scotland, Zimbabwe and Hong Kong before squeaking through after beating Nepal and having other results go their way.

The top two teams at the end the Super Sixes stage advance to the final on March 25 and also qualify for the 2019 World Cup. Despite their defeat, the West Indies still currently occupy one of those spots, sitting second.

Sitting pretty at the top of the table are Scotland, who leapfrog the Windies into first place, following a handy 73-run win over the United Arab Emirates.