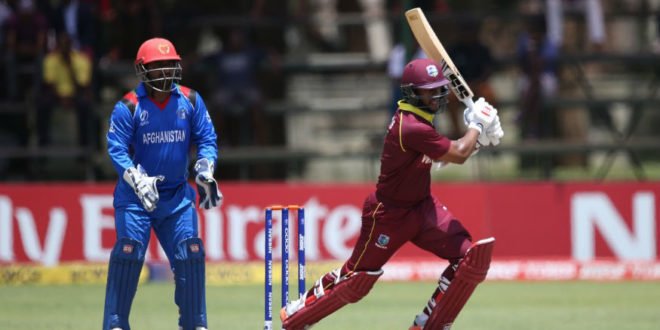 Afghanistan eased to a seven-wicket win over West Indies in the final of the ICC Cricket World Cup Qualifier competition in Zimbabwe, bringing to completion a comeback that must rank among the greatest in cricket’s long history. Virtually written off after their disastrous showing in the group stage, Afghanistan rode on their self-belief – and a little bit of luck – to claim the trophy. Five days ago, Rashid Khan said “anything can happen”, and this Afghanistan team has shown that to be true.

Today, West Indies decided to bat first on a tacky, slow surface but their batting never got going, Rovman Powell top-scoring with 44. A Mohammad Shahzadspecial quickly brought the target within reach, while Rahmat Shah’s fifty kept the middle order steady, and Mohammad Nabi’s trio of sixes brought an emphatic end to Afghanistan’s time in Zimbabwe.

Shahzad cracked eleven fours and two sixes in his 84, and his fun with the bat began as early as the second over, when he top-edged a pull off Jason Holder to collect his first boundary. Seven more flowed off his bat in the Powerplay, including two sixes, as Shahzad seemed the only batsman from either side to fully come to terms with the sluggish pitch. His scoring was anything but, and he brought up a 45-ball fifty in the 16th over.

All manner of shots were on display: the helicopter, the ramp, the hack, the hoick and the slash all made appearances. Shahzad was a little less comfortable against spin, and Ashley Nurse had a couple of close shouts turned down. Eventually, it was the uncommon sight of Chris Gayle’s offspin that did in Shahzad. Closing in on what would have been a memorable hundred, and with Gayle floating the ball up extravagantly, Shahzad lined up one big shot too many. Aiming for the straight boundary, he instead chipped a catch to Holder at mid-off.

But by then, his efforts had brought the runs required to just 56, at an asking rate of just 2.94.

He had one last bit of showmanship left. As he left the field, just before he stepped over the boundary, he stopped, looked up at his team-mates on the balcony, and unleashed a star-man pose.

Shahzad had added 90 with Rahmat Shah, whose efforts may have gone a little unnoticed in the kerfuffle that usually surrounds Shahzad on the field. While Shahzad looked to manufacture shots, Shah was happy to bat in accumulation mode and wait for the odd loose delivery to put away. He found the pull particularly effective, collecting his boundaries off short balls from Holder and Carlos Brathwaite. He did all the hard work to reach a patient fifty in the 35th over, but then immediately give it away with an unnecessary charge at Gayle to be stumped for 51.

By then, however, the match was already as good as won. It was left to Mohammad Nabi to bring Afghanistan’s stunning qualifier comeback to an emphatic end. He launched three consecutive sixes – two onto the roof beyond long-on, the third over long-off – to bring the tournament to a close.

Nabi had also been one of Afghanistan’s four spinners who made best use of the conditions to keep West Indies’ big-hitting line-up quiet after Jason Holder decided to bat. Together, the spin attack bowled 34.5 overs, taking six wickets for 148 runs.

As usual, Mujeeb Ur Rahman took the new ball, and, as usual, his variations made life difficult for the batsmen early on. Once again, he also dealt with the Gayle threat. Swinging across the line at one that left him off the pitch, Gayle’s top-edge was safely pouched at point in the sixth over.

With Gulbadin Naib’s medium pace getting rid of Evin Lewis and Marlon Samuels, Rashid Khan then dismissed Shai Hope, lbw to a wrong ‘un, in the 23rd over. Though it was a slightly fortunate dismissal – the ball possibly spinning down the leg side – the wicket marked a major milestone for Rashid. It was his 100th in ODIs, coming in just his 44th match, making him the fastest – and youngest – player to reach the landmark.

From then, Afghanistan struck at regular intervals to peg West Indies back. Jason Holder was run out without facing a ball, Shimron Hetymer feathered a Sharafuddin Ashraf arm ball to the keeper, and Carlos Brathwaite spliced a simple catch to mid-off. Mujeeb, quietly consistent all tournament, then ran swiftly through the tail with three wickets in an over, as West Indies were bowled out in the 47th over.