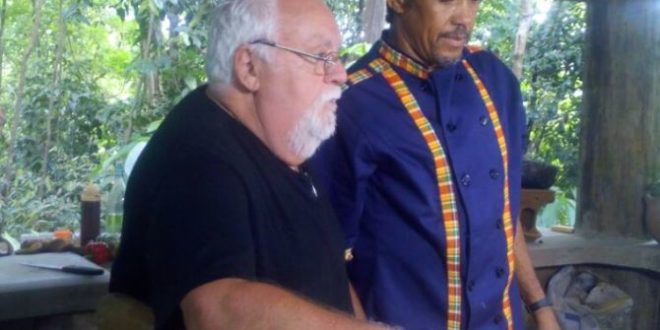 CASTRIES SAINT LUCIA – August 17, 2017 – Internationally acclaimed Chef Walter Staib has been named the recipient of the Historic Hotels of America 2017 Historian of the Year Award.

Chef Staib will be honored with this distinguished award on September 28, 2017 at the Historic Hotels Awards of Excellence Ceremony & Gala at The Omni Homestead Resort (1766) in Hot Springs, Virginia.

The Historic Hotels of America Historian of the Year Award is presented to an individual who has made a unique contribution in the research and presentation of history and whose work has encouraged wide discussion and greater understanding and enthusiasm for American History and historic hospitality.

Chef Walter is renowned for the television series A Taste of History, of which he is the show’s Creator, Executive Producer and Host. The show features his travels across the globe to historical locations, into famous kitchens and exotic markets, telling the unique story of American culinary heritage and its many influences, by recreating dishes inspired by the founding fathers.

Chef Walter has an ongoing love affair not just with the re-telling and capturing the history of the Americas, but with Sandals, Saint Lucia, and food glorious food! It was no surprise therefore, that Chef would naturally team up with Paul Bauer, Sandals Resorts’ Group Manager – Food and Beverage Standards, and himself a recent Emmy Award winner, for the filming of season 9 of the now multi-award winning series Taste of History in simply beautiful Saint Lucia.

Filming for the television series based on the City Tavern Cookbook: Recipes from the Birthplace of American Cuisine, is sponsored by Sandals. The book was authored by Chef Staib, who is also a Sandals’ Culinary Ambassador.

The show has filmed in several other Caribbean islands including Jamaica, Grenada, The Bahamas and the Turks and Caicos Islands, showcasing the local cuisine of each island and tracing the historical influences, with the Grenada episode copping the Emmy Award for Paul Bauer.

In this episode of A Taste of History, now into its 9th season, the team chose a number of exotic locations on island including Lushan Country Life and Fond Latisab, both rich in history and situated on the north coast of Saint Lucia in the burgeoning village of Babonneau. The episode is dedicated to highlighting The Creole language with a focus on the Antillean Creole spoken on Saint Lucia and how it came to exist. The highlight of the show will be intriguing interviews with Historian Dr Greggor Williams delving into Saint Lucia’s past, and Mr. Hilary LaForce, Executive Director of the MSGR. Patrick Anthony Folk Research Centre, Saint Lucia (previously the Folk Research Centre), speaking on the rise and history of Creole in Saint Lucia. 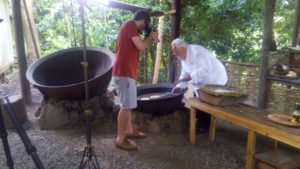 Chef Staib owns and operates a restaurant in Philadelphia, which was built in 1773. Of food, he says, “preparing food for someone is the most intimate thing you can do. Food expresses love and culture… it is therapeutic. I don’t use additives or preservatives. Food shows you a little bit of the heart of the communities.” A Taste of History airs throughout the United States on PBS and RLTV.