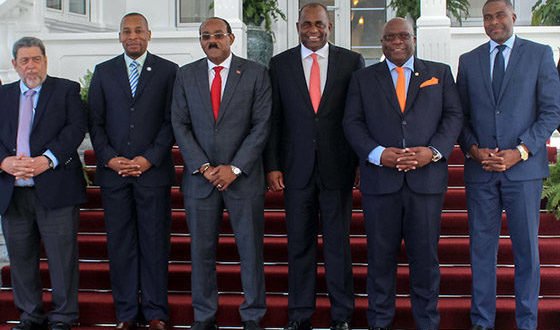 1.0 Monetary StabilityThe Monetary Council received the Governor’s Report on Monetary and Credit Conditions in the Eastern Caribbean Currency Union (ECCU). The report assesses the recent trends in monetary and credit conditions, within the context of the Bank’s broader objectives of ensuring the stability of the exchange rate and exchange arrangements and the stability of the financial system. The key messages from the report were:

Having considered the monetary and credit conditions in the ECCU, the Monetary Council agreed to maintain the minimum savings deposit rate at 2.0 per cent; and maintain the Central Bank’s discount rate at 6.5 per cent. The Minimum Savings Rate is the lowest rate commercial banks can offer on savings deposits. The Central Bank’s Discount Rate is the rate at which the ECCB lends to commercial banks.

For the year 2016, the ECCU financial system was assessed as stable. The resilience of the financial system to potential adverse shocks strengthened and major risks to financial stability in the ECCU diminished. However, the banking sector continued to be challenged by structural vulnerabilities, including correspondent banking relationships.

The improved performance of the financial sector is expected to continue into 2017 in line with stronger economic growth and improvements in the regulatory and supervisory framework. Notwithstanding, vigilance must be maintained to ensure that gains are sustainable.

Having considered the recommendations from the ECCU Working Group on Commercial Bank Fees and Charges and the ECCU Bankers Association’s feedback, Council approved the implementation of the following measures to address concerns regarding increases in commercial banks’ fees and charges:

The fiscal position of member governments is expected to continue to strengthen. Gains are expected in tax and non-tax revenue as economic activity increases and the Citizen by Investment (CBI) programmes investments proceed apace.

At its 87th Meeting, held on 2 March 2017, Council agreed to recommend that member governments submit fiscal targets for the approval. Council therefore agreed to recommend to Member Governments that they implement mechanisms to secure Parliamentary approval of fiscal and debt targets, medium term frameworks as far as practicable with social partners, and for periodic peer review.

The ECCB hosted the inaugural ECCU Growth Dialogue with Social Partners on 1 March 2017. The Dialogue sought to create a unique opportunity for social partners to engage the Monetary Council on the issue of economic growth and to forge consensus on a plan of action for addressing growth, competitiveness and employment in the ECCU. Following the Dialogue the ECCU Growth Action Plan was developed.

In keeping with its commitment to the implementation of the ECCU Growth Action Plan, the Monetary Council:

Council also agreed to urge commercial banks to increase lending to the private sector in an attempt to spur growth. Council noted with increased concern, the difficulties with payment settlement of traders selling agricultural produce in Trinidad and Tobago. Council further noted that the ECCB has submitted a proposal to the Central Bank of Trinidad and Tobago to resolve this issue and expressed the view that a resolution has to be found for this matter. Council urged that this long standing matter be resolved expeditiously. In the meantime, the Council Member for St Vincent and the Grenadines updated the Monetary Council on a solution that his government is advancing.

5.1 Proposed Areas of Amendment to the Banking Act 2015

At its 86th Meeting held on 21 October 2016, the Monetary Council approved the establishment of a Ministerial Subcommittee of the Council, chaired by the Council Member for St Vincent and the Grenadines, to lead discussions with stakeholders on the proposed amendments to the Act and to facilitate the process through to its enactment.

5.2 Amendments to the AML/CFT Legislation

At its 85th meeting held on 22 July 2016, Council took the decision to recommend to Member Governments that the legal responsibility for Anti-Money Laundering and Counter Financing of Terrorism (AML/CFT) supervision and regulation of financial institutions licensed under the Banking Act be transferred to the ECCB.

The Monetary Council therefore considered the proposed areas of amendment to the Anti-Money Laundering and Counter Financing of Terrorism Legislation (AML/CFT legislation) in Anguilla, Antigua and Barbuda, Commonwealth of Dominica, Grenada, Montserrat, St Kitts and Nevis, and Saint Lucia, to transfer the regulatory and supervisory authority of AML/CFT for institutions licensed under the Banking Act to the ECCB.

6.0 Report From the Technical Core Committee on Insurance – BAICO

Council noted that the Plan of Arrangement (BAICO and CLICO) Act has been passed in all ECCU member countries and in the home jurisdiction of The Bahamas. Council further noted that once the agreements of the respective Courts are received, this would pave the way for the meeting of the creditors and a distribution to BAICO policy holders in the last quarter of 2017.

With respect to CLICO, progress has been markedly slower and resolution is a greater challenge. The Technical Core Committee is exploring a number of options to have the issues relating to the CLICO policy holders addressed effectively.

8.0 Date and Venue of 89th Meeting of the Monetary Council

Council agreed that the 89th Meeting of the Monetary Council would convene on Friday, 20 October 2017 via videoconference.

Council Members attending the meeting were: