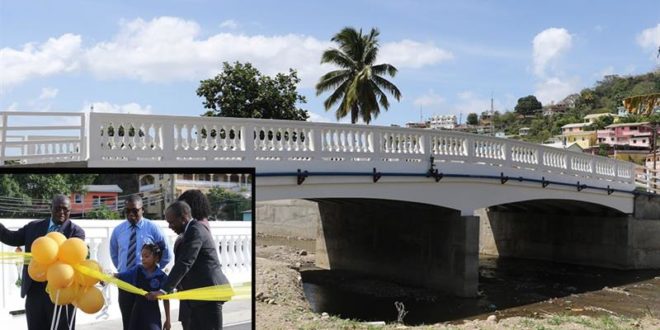 GIS – THE NEW BRIDGE IS RESISTANT TO FLOODING AND CONFORMS TO INTERNATIONAL QUALITY STANDARDS.

Chief Engineer in the Ministry of Infrastructure, Ports, Energy and Labour, Albert Jn. Baptiste, has noted that new realities, such as climate change, new river dynamics, and a constrained economic environment, have dictated a change in the way bridges are designed.

Mr. Jn. Baptiste made those comments during the recent official opening ceremony of the Canaries bridge. The previous bridge was severely undermined during 2013 Christmas Eve trough. The chief engineer said the Ministry of Infrastructure must be commended for its efforts at repairing the country’s critical bridge infrastructure.

“There is no doubt that there is a serious maintenance backlog—a need to reconstruct our bridges especially in light of the fact that the hydraulic and physical realities that then governed their designs have changed significantly,” Mr. Jn. Baptiste said. “The Ministry of Infrastructure, needs to adopt a climate SMART approach to bridge design. It should be simple, meticulously done, artistic, resistant to flooding and should be able to withstand the test of international standards.”

He added that the present fiscal reality requires innovation, creative engineering, and effective problem solving, so as to keeps costs at a minimum.

The new structure is a double-span, 28.8 meter-long bridge, with a center support, a two-lane carriage way and sidewalks. The bridge was built to conform to Code 5400 of the British standards. The new Canaries bridge was funded jointly by the Caribbean Development Bank (CDB), and the Government of Saint Lucia, at a cost of nearly six million dollars.