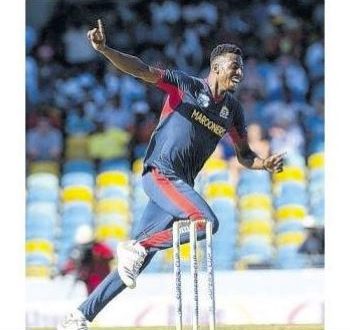 GROS ISLET, St Lucia (CMC) — Guyana Jaguars were poised to open their Regional first-class campaign with a win after a strong batting performance gave them the upper hand against Windward Islands Volcanoes on the penultimate day of their first-round match here Saturday.

Resuming on 115 for three at the Darren Sammy Cricket Ground, Jaguars declared their second innings on 310 for four with opener Tagenarine Chanderpaul extending his 29 to an unbeaten 84.

More crucially, however, Clinton Pestano smashed 69 and Chris Barnwell, an unbeaten 61, to set Volcanoes a target of 348.

At the close of the day/night encounter, Volcanoes were 54 for two, with Taryck Gabriel unbeaten on a fluent 33 from 55 balls, including five fours.

Boasting a lead of 37 on first innings, Jaguars consolidated well, with the left-handed Chanderpaul anchoring the innings.

Chanderpaul, the son of legendary West Indies left-hander Shiv Chanderpaul, put on 111 for the fourth wicket with Pestano before adding a further 85 in an unbroken fifth-wicket stand with Barnwell.

All told, Chanderpaul faced 333 balls in just short of seven hours at the crease and struck three fours.

However, it was Pestano and Barnwell who provided the bulk of the scoring with two breezy innings.

Pestano, in only his third first-class match, struck two fours and five sixes in 127 balls at the crease, while Barnwell faced 80 balls and struck a couple of fours and sixes.

At the 3W’s Oval in Bridgetown, Barbados ended the day on 13 for one, in search of 170 for victory, after a strong bowling performance saw Leeward Islands Hurricanes bundled out for 165 in their second innings.

Resuming on 197 for six, Pride were dismissed for 248 — just four runs short of the Hurricanes first innings total — with fast bowlers Alzarri Joseph (4-48) and Sheldon Cottrell (3-48) spearheading the attack.

In their second turn at the crease, Hurricanes struggled. They lost discarded West Indies opener Rajindra Chandrika in the first over without scoring with a single run on the board and never really recovered.

Jeremiah Louis top-scored with 39 batting at number nine, while opener Montcin Hodge got 26 and Damion Jacobs, 24.