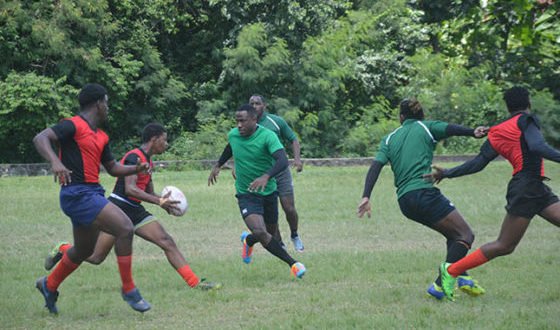 PRESS RELEASE:-The second leg of 2017 Community 7s Tournament was held on Saturday, 9 September, at Laborie Playing Field. The day’s fixture was affected as a result of a no show by Soufriere Lions Team and the matches for the female teams being postponed to a later date. Nevertheless, the male teams of Rogues Rugby Football Club, VBCC Stingers and Whiptail Warriors Rugby Football Club played on despite having their own internal setbacks. The matches were refereed by Chantel John.

The five member team of VBCC Stingers struggled in the two matches unable to put on any number on the scoresheet. The team played with commendable effort despite missing 2 players in the matches. Whiptail Warriors, who fielded a six member team, gave Rogues a good game putting in two tries, one from newcomer, Larry Eugene and the other from Dwayne Nathaniel. Their efforts were complimented by Tyrese Samuels who secured the two conversions. Rogues was undefeated for day 2 of the Tournament scoring 29 – 0 against VBCC Stingers and 28-14 against Whiptail Warriors. However, Zayvon Augustin, the player with the most tries for the day (4) and Tyrese Samuels, the player with the most conversions (6) are both from Whiptail Warriors RFC.

The third leg of the Tournament will be on Sunday, 17 September 2017, at Dennery Playing Field.