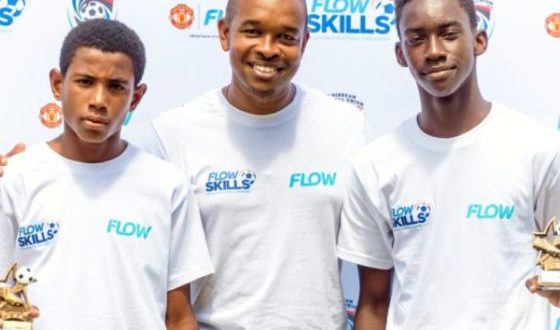 Press Release:–  MIAMI, FL, March 23, 2018: “Consider this the first step on your journey to greatness,” said Garry Sinclair, Flow Caribbean President as he congratulated the twenty-eight young footballers advancing to this weekend’s (March 23-25) Flow Skills Ultimate Football Experience Grand Finale in Port of Spain, Trinidad. According to Sinclair, “These youngsters have the enviable and unique privilege of being exposed to the highest level of football coaching skills and techniques courtesy of the biggest and most prestigious Football Club in the world – Manchester United. They are in for an amazing weekend and my advice to them would be to grasp this opportunity with both hands and absorb everything.”

During the course of the Flow Skills competition close to 700 boys and girls between the ages of 12 to 16 years old from across 14 Flow Caribbean markets competed, culminating in reaching the finals in Trinidad for a shot at the ultimate prize: a trip to the Theatre of Dreams – Old Trafford – in Manchester, England. Both winners will be chaperoned by his/her coach and a parent.

All participants will be exposed to the famous Manchester United Soccer School training techniques and some of their celebrated coaches. Tobagonian MU Legend Dwight Yorke will also interact with the finalists at the St. Joseph’s Convent Ground in Port of Spain during the weekend of activities and he will share words of encouragement and tips on how they can “up” their game.

This significant partnership with Manchester United, provides invaluable football development from both the player’s perspective as well as for the local in-market coaches. The Caribbean Football Union (CFU) has recognised and endorsed the program. Neil Cochrane, General Secretary of the CFU stated, “We are convinced that it won’t be too long before we begin to hear some of the region’s best players referencing this program for its contribution to their personal and career development in the sport.”

Garry Sinclair also said, “I am excited by the prospect of Flow Skills’ long term contribution to the development of the sport in the Caribbean. However, Flow Skills does more than simply underscore our commitment to the development of football across the region. Look at all the lives this initiative impacts for good. Emerging on top this weekend is going to be important, but what will be of even more significance will be the indelible imprint this initiative leaves on the hearts and minds of participants for years to come, regardless of whether they pursue football as a career or not. They’ll never forget this moment in time.”