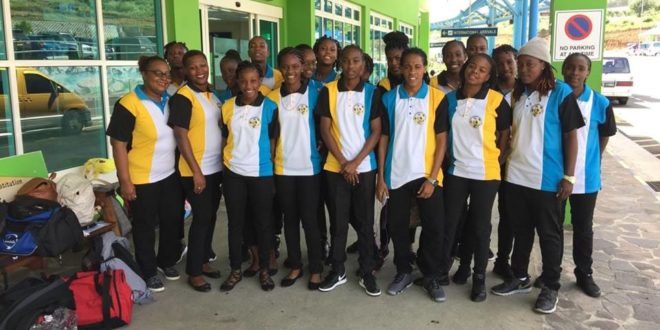 (PRESS RELEASE) – As the calendar year comes to a close, Team St. Lucia goes in search of a much deserved triumph at the Windward Islands Senior Female Football Tournament.

On Monday morning, a contingent of twenty five persons departed the George FL Charles Airport with their destination being St. Vincent and the Grenadines, the host country of this year’s event. The delegation is led by manager Ms Karen Fowell who oversees a squad of twenty players and four other members of the technical team.

Experienced and widely reputed coach St. Croix “Vaso”Albert has been appointed head coach of the team which has been committed to a strict training regime in preparation for the tournament. Training camps, local friendly matches and the mastery of particular playing styles (in accordance with the St. Lucian football philosophy) formed the basis of the four month long training program.

Accompanying the women to the tournament was the SLFA Assistant Secretary responsible for Technical Development and mastery Ces Pod. Mr Pod took time out prior to their departure, to convey his contentment with the team’s level of preparation and the general momentum of women’s football on the island. Sounding very optimistic, Mr Pod also explained that he is anticipating a very impressive performance from the girls in this championship.

The Windward Islands Wolmen’s Championship this year will feature four teams which include host nation St. Vincent and the Grenadines, St. Lucia, Barbados and Grenada. Dominica’s usual participation in the annual tourney has been impeded as the country is yet to be totally relieved from the ravages of the devastating storm which passed over the island earlier this year. However, in support of Dominica’s cause, all proceeds generated from ticket sales will be contributed to the island’s football association to assist with their speedy return to competitive football.

The St. Lucian’s are scheduled to commence their campaign on Wednesday November 22nd with a stern test in the form of Barbados. Sweet Helen will be relying on their talismanic midfielder Elisa Marquis to impose her creativity on the game and shape the outcome in St. Lucia’s favour. The tournament will run until Sunday November 26th, as St. Lucia goes on to face Grenada and St. Vincent and the Grenadines respectively. The emerging victors will be the team which would’ve amassed the most points throughout the competition.

Indeed great things are expected from the St. Lucian women as they approach this competition with utmost seriousness as it leans upon the heels of next year’s Olympic Qualifiers. This tournament then serves the vital purpose of much needed international practice ahead of those games.

Below are the names of the women who will represent St. Lucia at the Windward Island Tournament: