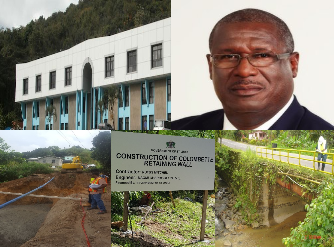 2018 Projects Digest: Working for you

(PRESS RELEASE) – The Department of Infrastructure, Ports and Energy has released a “2018 Projects Digest”, chronicling significant progress in the execution of Government`s Capital Works Programme.

The magazine under the theme “working for you”, was produced by the Department`s Communications Unit. It highlights the construction of new bridges, roads and drainage in every geographic location around Saint Lucia.

Minister for Infrastructure, Ports, Energy and Labour Hon. Stephenson King says the Projects Digest is part of a new thrust by his Ministry, to inform and educate the population, about important work being undertaken, towards infrastructural and national development.

The magazine was first published in last weekend`s issue of the star newspaper, targeting an estimated six thousand readers.

Permanent Secretary Mr. Ivor Daniel says Public Relations and Education is an equally important responsibility of the Department of Infrastructure, Ports and Energy. He says for a long time the Department has overlooked this responsibility and is now pleased to have a new and dedicated PR & Communications thrust.

The Department of Infrastructure, Ports and Energy aims to produce a Projects Digest every quarter.

It will be made available at Public Institutions around the island.