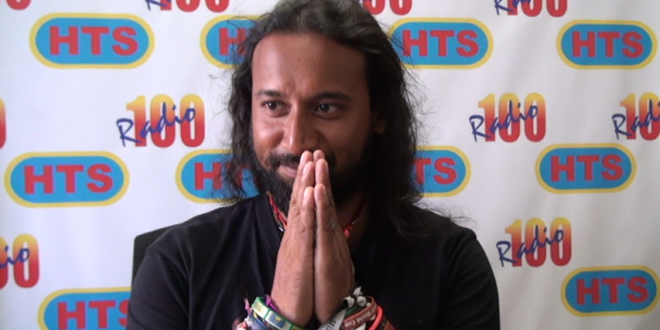 Most people tend to look for work after graduating from university and chart a course for potentially productive careers. Somen Debnath is not most people. He instead has taken a different course, 200,000km to be exact as part of global one-man mission to raise awareness about HIV and AIDS from 2004-2020.

The 16-year long bicycle ride has rolled into Saint Lucia. The Indian national said he that first setout on his more than decade long journey back in 2004 to raise awareness, generate support and funding for HIV and AIDS programs.

Somen was 21 when he first mounted his bicycle to embark on the world tour. He has set an ambitious goal to travel across 191 countries by year 2020.

118,000km of the decade spanning journey will be dedicated to charity.

Somen Debnath visited the studios at HTS on November 20, 13 years after his global AIDS awareness campaign [first] began. Now 34, he has ridden across 135 countries on two wheels.

Somen told HTS News4orce the motive for his daring and seemingly lifelong mission came about when he was in his teens and he first learned about the perils of HIV/AIDS without adequate medical treatment.

HTS News4orce: How did you get the idea to start this journey?

Somen Debnath: I was 14 when I read in a newspaper article that AIDS was deadlier than cancer. I knew cancer was [also] a difficult disease…so that’s why I wanted to learn more about HIV and AIDS and convey that message to the society.

Somen has the financial backing of a number of private donors. He has received sponsorship from global firms like DHL and TaTa. He told News4orce that 60% of all monetary donations go directly to various HIV and AIDS programs. 40%, Somen says is used to pay for travel fees; plane, ship / boat tickets when his bicycle cannot physically take him to a specific destination.

Somen said he first arrived in Saint Lucia from neighboring Martinique on November 12. The local Indian society has arranged meetings with government officials including a meet-and-greet with the Prime Minister and, before Somen heads off to his next destination, he plans to meet the Governor General. Each encounter Somen hopes will build on the awareness on the affliction of HIV and AIDS and continue to generate support to fight the disease.

HTS News4orce: What’s the reaction when you arrive in a country?

Somen Debnath: It is great things when I come to a country…it is a great opportunity to meet the local people and I’ve found that Saint Lucia is one of the [most] beautiful countries in the Caribbean.

Saint Lucia is 238 square miles. Somen said he has toured most of the countryside and visited various historical sites since he arrived on island.

India is 1.24 million sq miles in diameter, Somen said it took two [2] years from 2004 – 2006 to complete the first leg of his cross continental bicycle tour.

There were 1.8 million new infections of HIV and more than 36.7 million people still living with the disease as of 2016. UNAIDS has set a target to end the spread of HIV and AIDS by 2030.

Somen will spend the next three [3] years cycling from North America to Russia, China, Mongolia, Japan, New Zealand and Bangladesh before completing the unprecedented journey peddling on two wheels back in India.

Somen Debnath’s global bike ride is set to end ten years shy of the UN objective but, is hopeful that his daring crusade against the disease that has claimed more than 35 million lives since the start of the global epidemic can boost awareness in all corners of the globe.